Singer 111W155 Gets A New Servo Motor And Needle Positioner

It's about time. I bit the dust and purchased a servo motor for my industrial Singer 111W155 sewing machine. I had hemmed and hawed for several years whether or not I should buy one. On the one hand I'm old school and like things the way they were built way back when, clutch motor and all. On the other hand, a servo motor would make a much more desirable experience when using the ol' beast. So practicality won out in the end. This photo shows the old clutch motor next to the new servo motor and controller. Now I just need to find space to store the old clutch motor as I won't be getting rid of it. 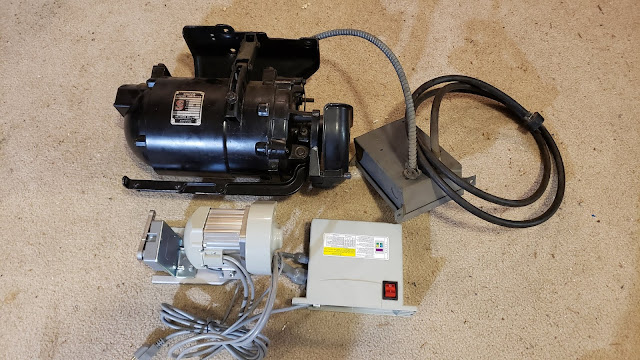 Just for grins, I weighed the old motor and it came in at an even 61 pounds. Coincidentally, I happened to weigh the sewing machine head when I first bought it five years ago and it weighed 61.5 pounds. So motor and machine together are 120.5 pounds, not including the table they mount to.

I bought the servo motor on Amazon for $105 plus tax. It is 110 volts and has a 550 watt motor, and I ordered it with a needle positioner.

The new motor bolted in place using the old motor's bolts, which was very handy so I didn't have to drill any new holes in the old table. 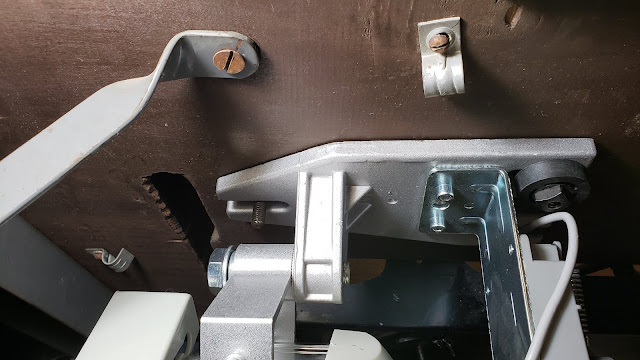 The speed control lever should have a hole in the right end for the foot pedal rod but as can be seen, there is no hole. I had to drill it out. 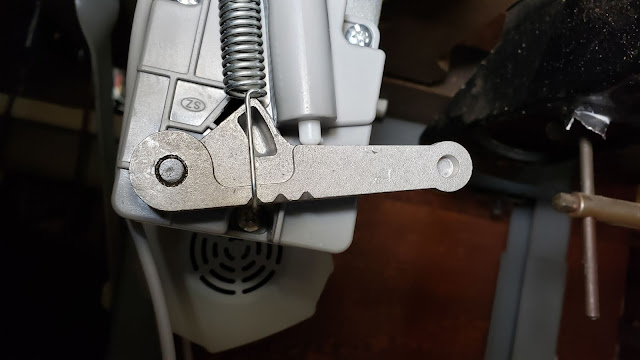 Once everything was in place, I found the belt to be too long, so I ordered a 38 inch belt. I think the old belt was 43.5 inches. 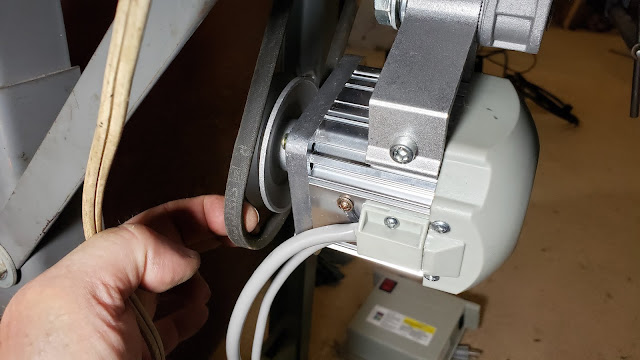 Programming instructions are on the side of the control box. A sheet of paper also came with the package with the same information on it. 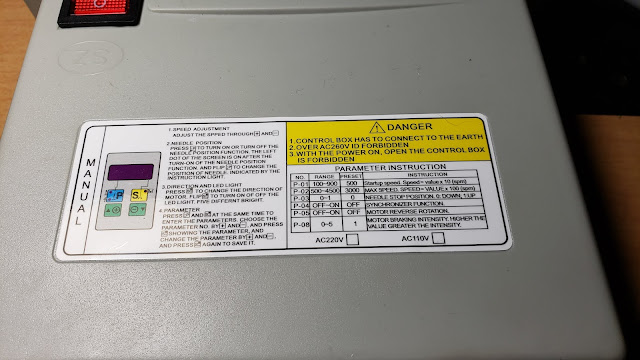 The next step was to install the needle positioner. What this gizmo does is tell the controller to stop the motor when the needle is in either the up or down position. The photo below shows the adapter that comes in the kit. I had to modify it to fit onto my machine. 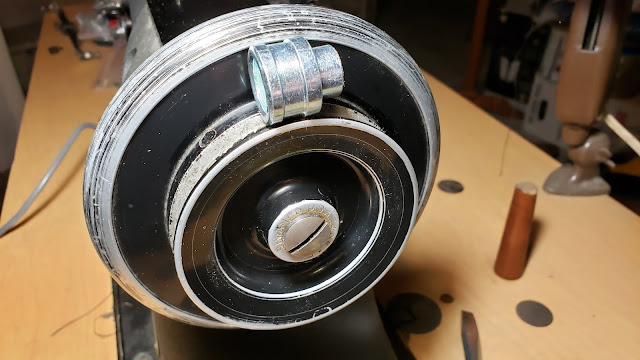 First of all, the center hole was too small for the handwheel screw head to fit into. 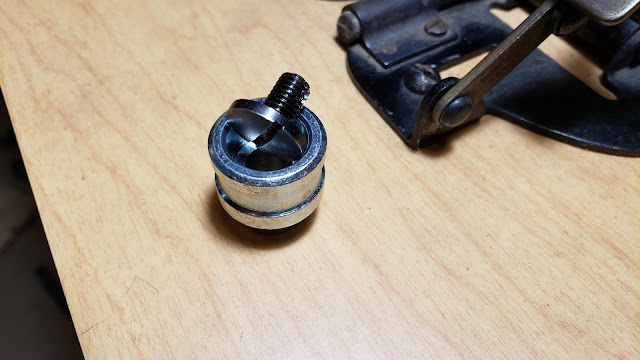 The end of the adapter was also too long... 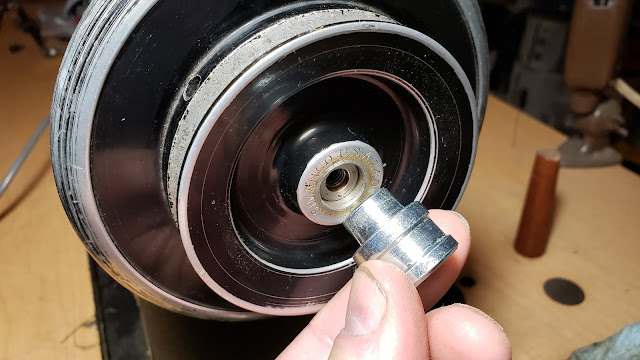 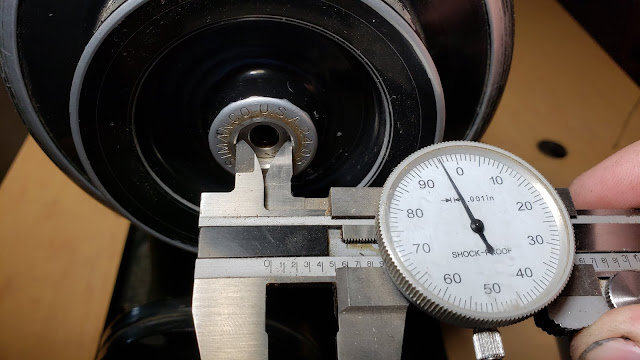 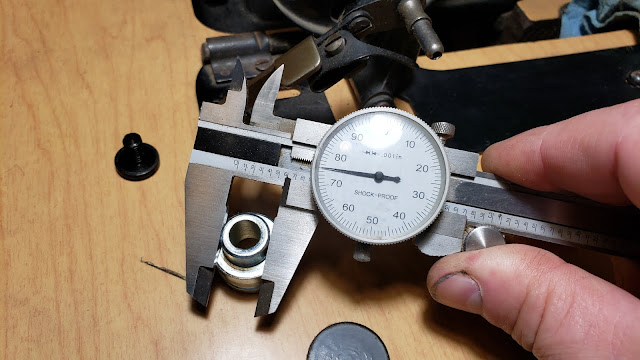 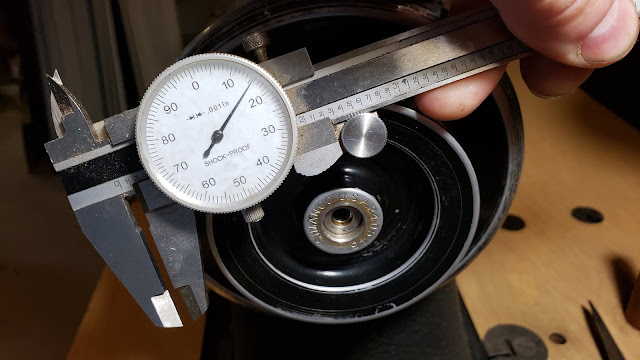 The head of the screw is 0.625 inches in diameter. 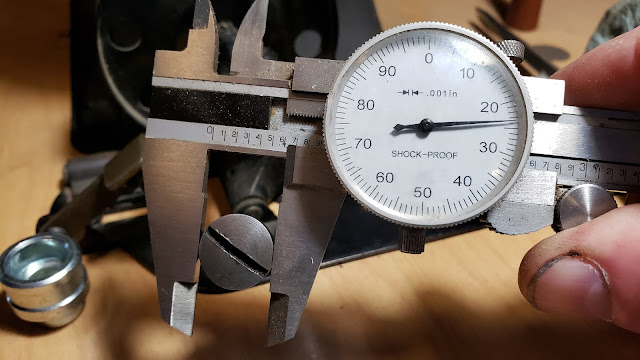 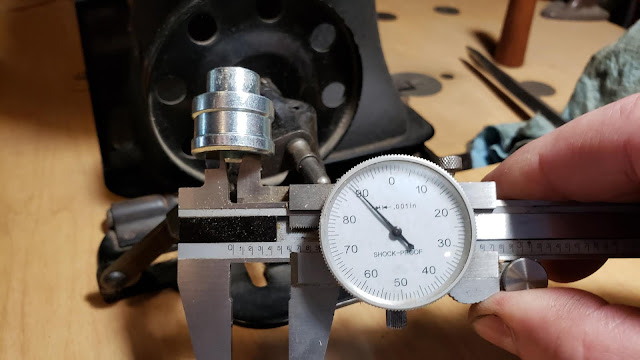 Here's the finished product. I did the work on my 1940 Sheldon 11-inch lathe. 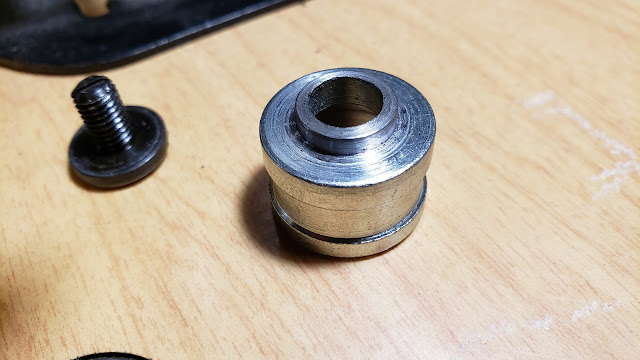 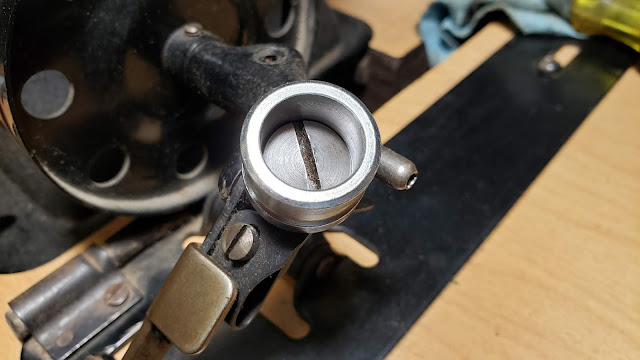 Plenty of screw threads protruding out of the adapter. 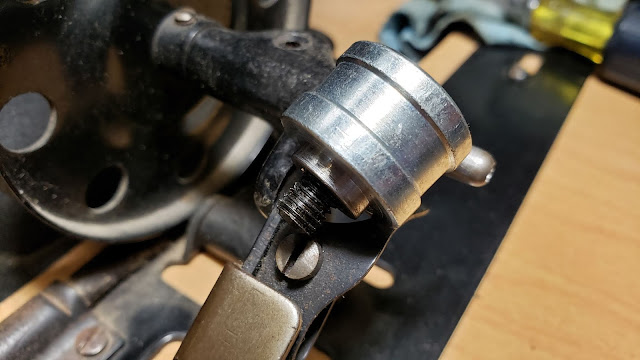 The adapter is installed. 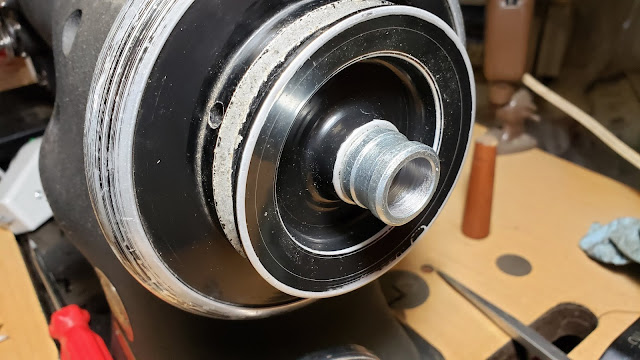 The needle positioner then attaches to the adapter with three set screws. 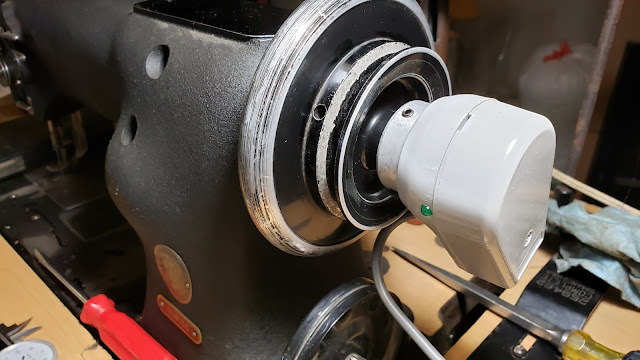 After programming the controller (see below) to tell it a needle positioner is being used, the green light on the thing lights up at a certain point in the rotation of the collar. The timing of the light coming on and the needle being at its highest position is what needs to be achieved. I set the needle to its highest position, then rotated the positioner's collar until the light lit, then tightened the set screws. (See a bit later where I have the positioner horizontal, not vertical like in this photo. I had to retime the collar to the needle's position after I repositioned it.) 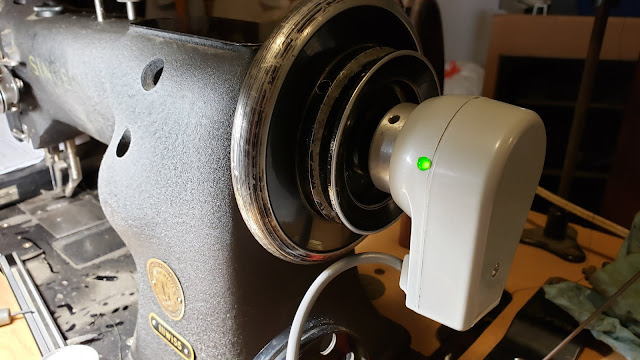 Here's how to program the control box to tell it a needle positioner is being used. Press the P and S buttons simultaneously. This brings up the programming stage. 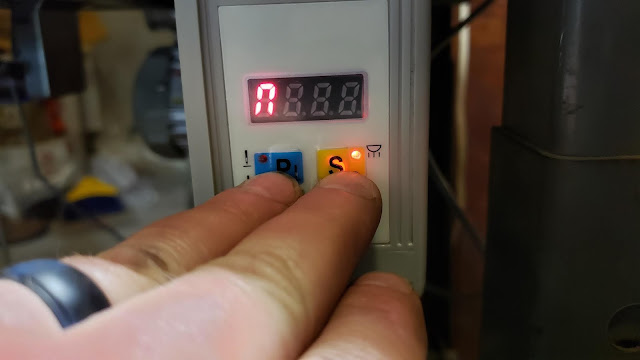 P-01 is to tell the controller what to set the lower RPM limit to, P-02 is upper RPM limit, P-03 is for needle-up or needle-down when the motor stops, and P-04 is to turn the needle positioner feature on or off. I want P-04, so I pressed the + button until P-04 was displayed. 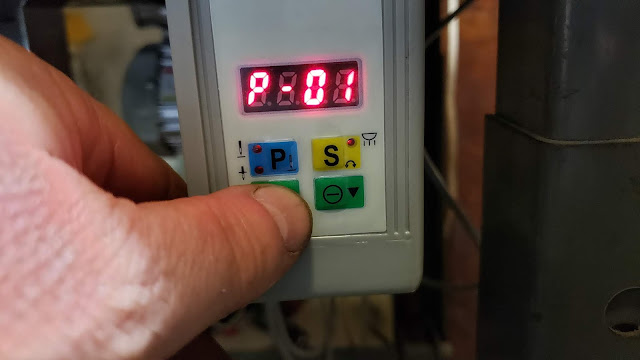 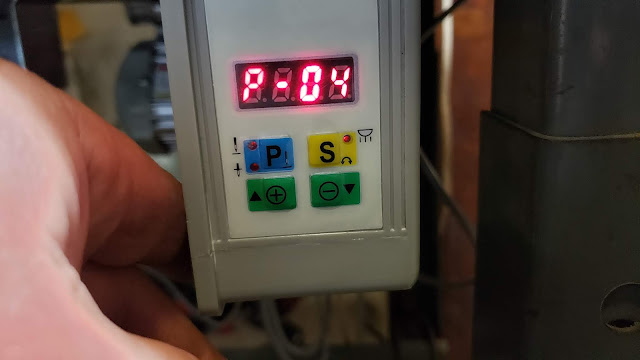 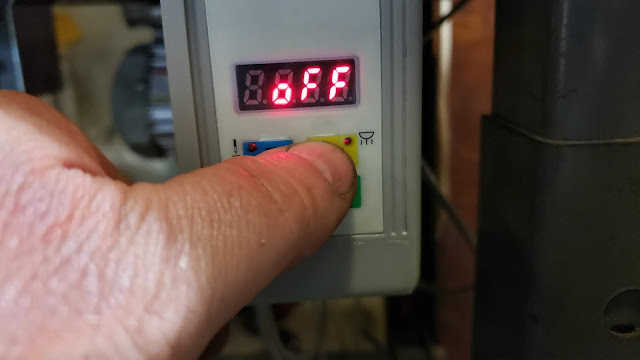 Once On is selected, press the S button once more to exit programming. 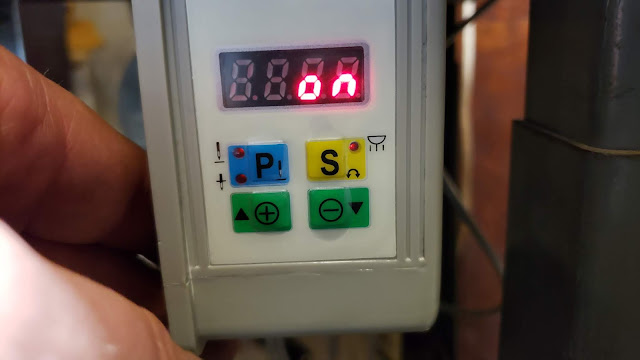 The below photo shows the final orientation I chose for the needle positioner. I made a makeshift wire bracket to hold the positioner in one spot, just to test things out. All that is needed is something to hold the positioner in one fixed position. I'll make a better bracket than the flimsy wire at some point once I know everything is working right. In the photo there are three angle rods that came with the kit. They're supposed to screw to the sewing machine and be used as a positioner stop. 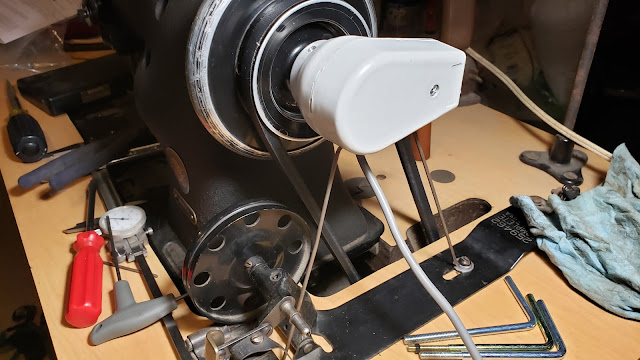 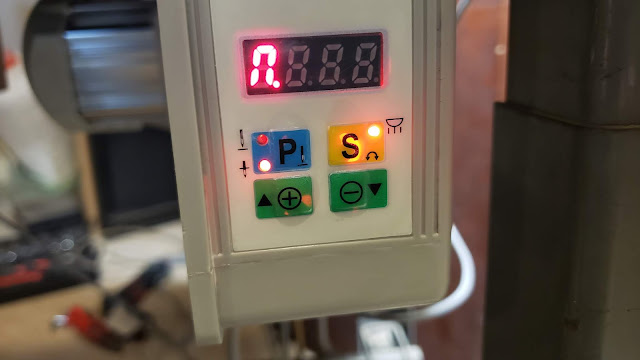 Below are a couple photos showing stitch samples. The first one is 10 stitches per inch and the next photo is five SPI. I was sewing through four layers of denim and the servo motor powered right through. A couple spots were six or eight layers and it still did fine. I was impressed. 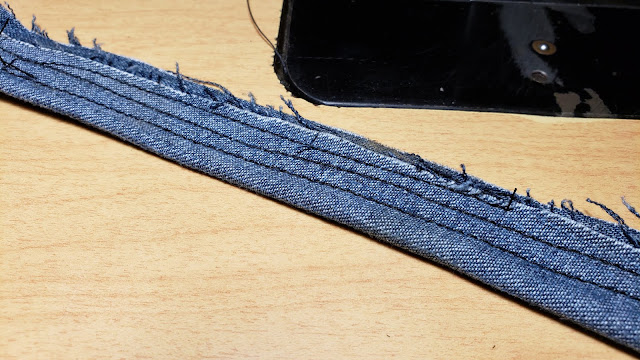 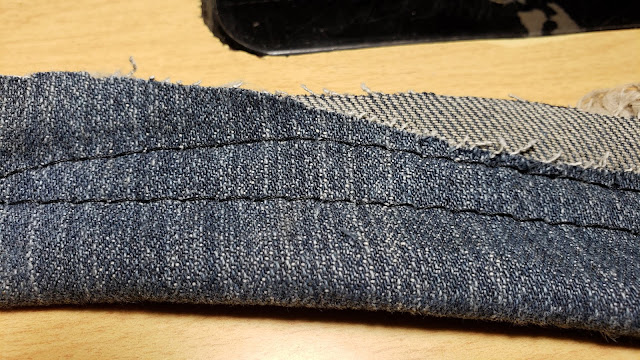 I initially thought 100 RPM (motor RPM, not sewing machine RPM) would be a nice minimum speed to have programmed in but after using it for a little bit, I found it to be a bit too slow, even for me, so I upped it to 200 RPM. I have the upper limit set to 1500 for now. I probably won't go much higher than that, although it is capable of going to 3000 RPM.

Posted by sewingmachinenut at 2:55 PM

sewingmachinenut
Poulsbo, WA, United States
NUT: - Slang - a. A crazy or eccentric person. - b. An enthusiast; a buff. - I prefer to think of myself as the latter.