The title sounds like one of the old Home Improvement shows where Tim the Toolman Taylor would advertise some new Binford tool.

Tim: "Hey Al, what do you suppose we could use for that new awning we need to make?"

Tim: "Let's see if this New Nome Memory Craft Binford 6000 sewing machine will do the trick."

Ok, so it's a little lame. I guess that's why I'm not in Hollywood writing for these guys...

So, here we are, my lovely bride and I taking a nice drive out of the area a few days back. I'm telling her that because of the horrendous pile of sewing machines needing attention in the basement, I'm thinking I shouldn't frequent any Goodwills or thrift stores until I whittle down the inventory. She says "let's just go to this one store we haven't been to before". Ok, hon. So we stop in at the Goodwill store in South Tacoma and what do I see but a New Home Memory Craft 6000 sewing machine. I didn't know what it was at the time. I just saw another newer machine. I did notice though that it had a pink 1/2-off price tag, lowering the price to a manageable $10. 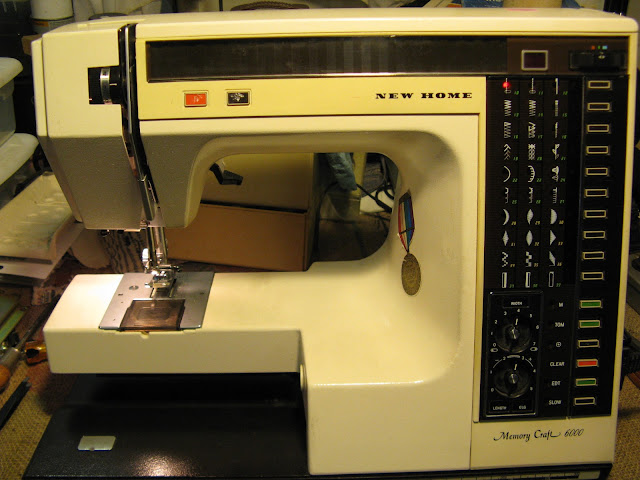 Since I could tell it was electronic to some degree, I plugged it in and tried a few rudimentary functions just to make sure I wasn't buying an ugly door stop. It did seem to work. Fast forward a few days to today. The machine looks pretty decent, so I thought I'd try some stitches. Straight stitch works. Zig zag works. On to some fancy stitches that require the feed dogs to go both forward and reverse. Nope - didn't work. I decided to pop a few covers off and see what there was to see...... The innards of this puppy haven't seen the light of day for a while, and this next photo is it's good side. I didn't get shots of the wads of lint removed from the back side. 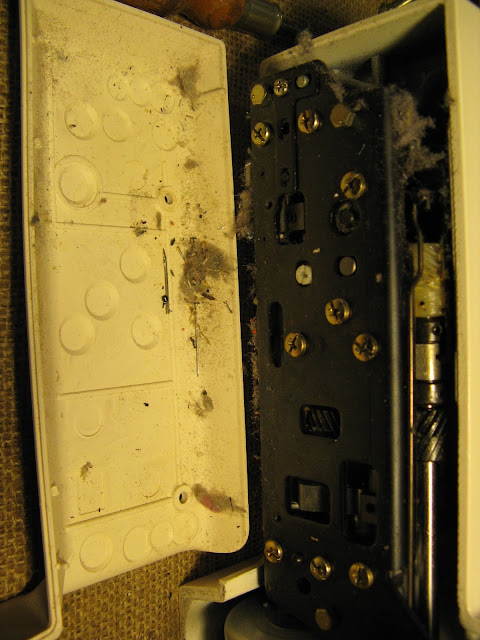 I again tried some fancy stitches but to no avail, so I poked around inside the machine, trying to reseat every connector that I could find. And let me tell you, there were plenty. 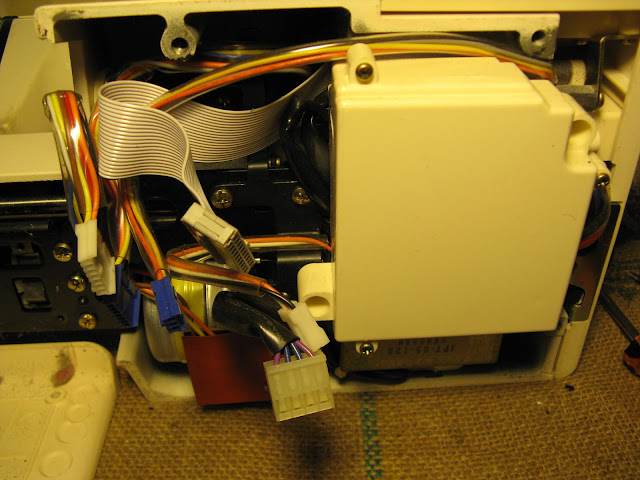 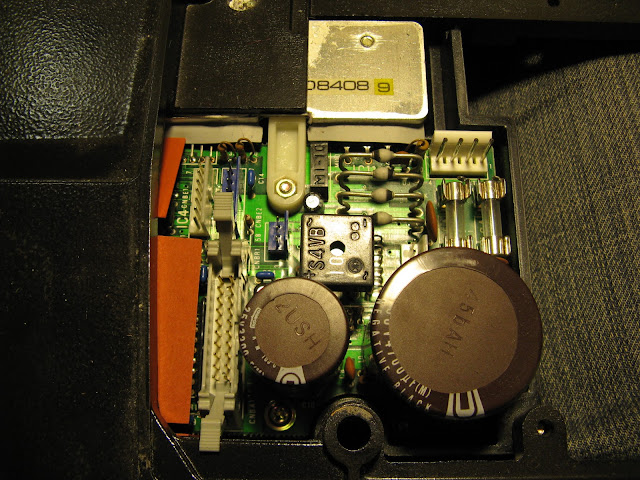 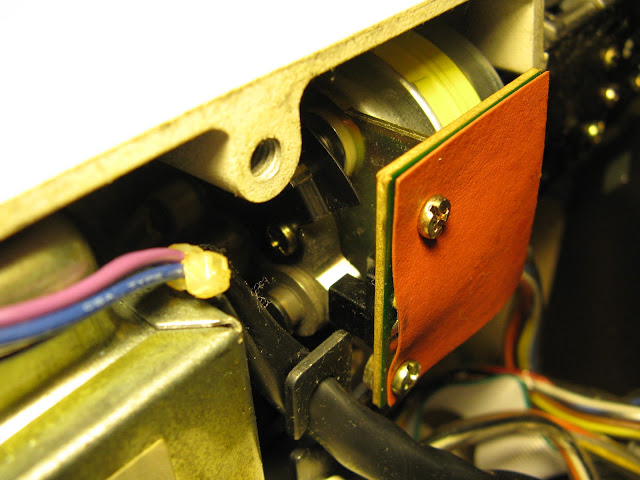 I again tried some fancy stitches and lo, it seemed to be working, at least for now. Ok, now to try my hand at programming something. Here's what I came up with (yes, it does letters - 135 or so different stitches in all): 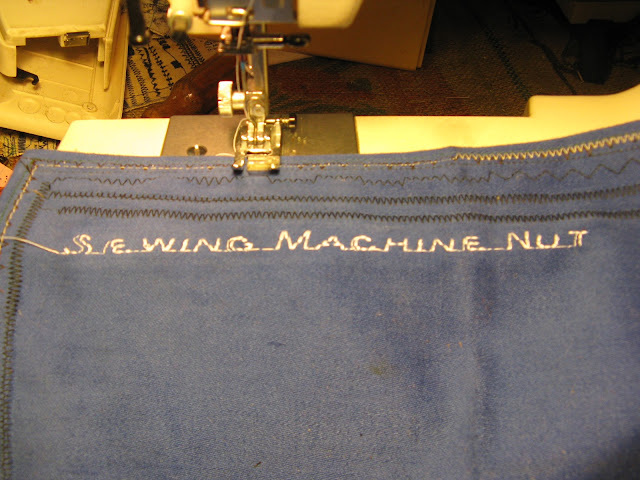 Hey, look, it works. And even better, I can program it to some degree. I don't have a manual for this thing but I can get by for now. Below are some more shots of interesting features of this machine. The first couple show some LEDs on the bottom that indicate something. LED 1 appears to be lit whenever the machine has been plugged in. It still glows after unplugging the machine, so it must be connected to some big capacitor inside. LED 2 comes on when the machine is on. LED 4 blinks momentarily when the power switch is flipped off. I haven't seen LED 3 come on. 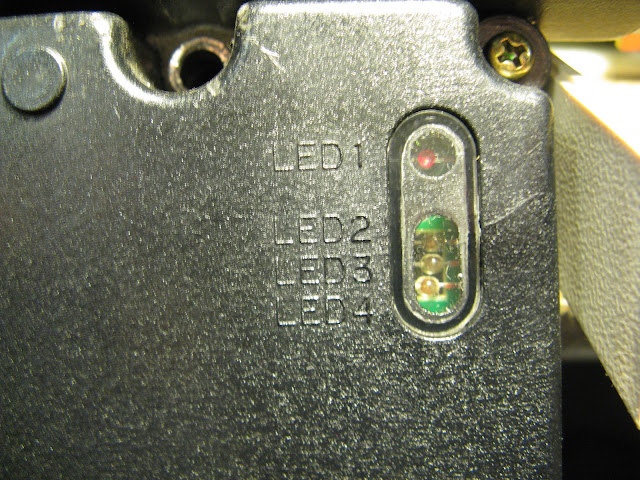 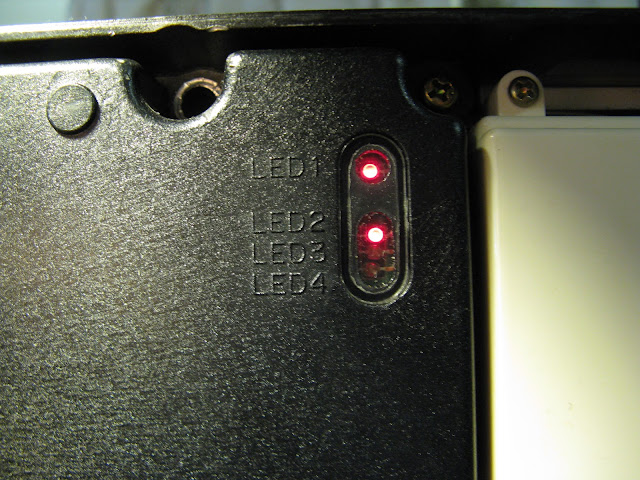 DANGER WILL ROBINSON!!!! (see below) - I'd better not even think of taking this cover off... But a label like that will only make me want to take the cover off even more. 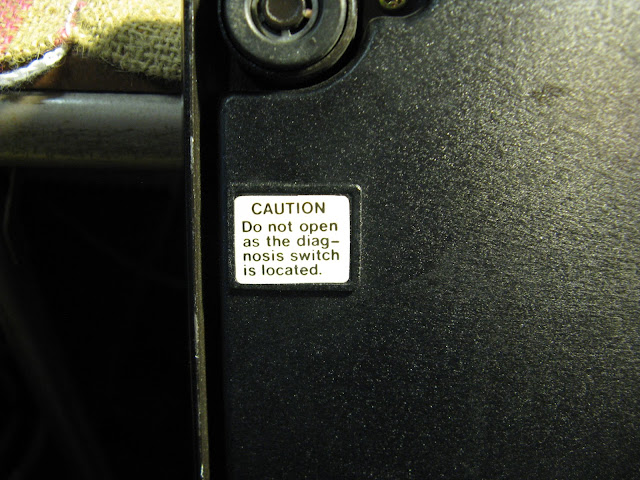 I'm sure I'll report more on this sewing machine at some point but that's all for now.
Posted by sewingmachinenut at 6:17 PM

sewingmachinenut
Poulsbo, WA, United States
NUT: - Slang - a. A crazy or eccentric person. - b. An enthusiast; a buff. - I prefer to think of myself as the latter.